2006
Ashley Whelan is an Astrophysics graduate from the University of Colorado At Boulder. She is a graduate student in Space Policy Institute at George Washington University. Whelan is interning at the Space Foundation’s Washington, D.C. Office. Her scholarship will used to attend the 2-month International Space University Summer Session in Strasbourg, France.

Daniel K.A. Jachowski was selected for the WSBR graduating scholarship based on his science fair project on GPS. He recently graduated from a public high school in Alexandria and will attend Stanford this fall.

2005
Daphne Dador is a M.A. Candidate for International Science & Technology Policy with a concentration on Space policy at the George Washington University in Washington, D.C. Dador’s scholarship was used towards her participation in the International Space University (ISU) summer program held in Strasbourg, France. Of this experience she states, “I gained new skills and experiences which I couldn’t have received anywhere else on the planet!” 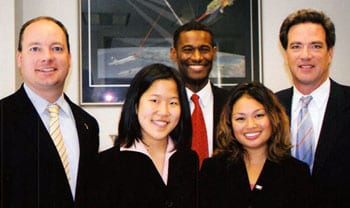 Renee Park is a graduate of Montgomery Blair High School in Silver Spring, MD and will be entering Princeton University this fall. Park was selected on the basis of a research paper entitled “Effects of Atmospheric Turbulence on Simulated Starlight in a Low-Pressure Telescope Environment”. This was based on a study of the possibility of detecting extra-solar planets from within the stratosphere. This project was considered along with dozens of space and science entries submitted from the Greater Washington DC Metropolitan area to the International Science Engineering Fair (ISEF.) 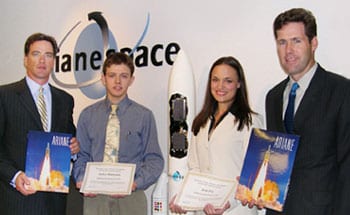 Erin Fry graduated from South River High in Edgewater, MD. Fry was selected for her project on “Water on Mars: How Much Then, How Much Now?” She has worked for several years as an intern at NASA/Goddard and will be entering Harvard University this September as a freshman.

Andrei Munteanu graduated from Benjamin Banneker Academic High School in Washington, D.C. Munteanu was selected for his project “A Novel Algorithm for Computing the Minimum Distance between Two Elliptical Confocal Orbits.” He has worked as a summer intern at the U.S. Naval observatory and will also be entering Harvard as a freshman. 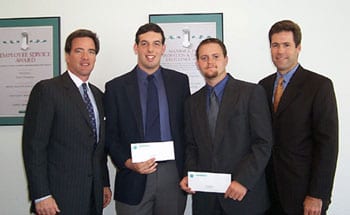 George F. Eichinger and David Schmitz, both graduating seniors from McLean High School in McLean, VA, were selected as a team for their collaborative work a project entitled, “The Use of Electromagnetic Induction for the Propulsion of Mass”. Their project was considered along with dozens of space and science entries submitted from the Greater Washington DC Metropolitan area to the International Science Engineering Fair (ISEF), held this year in Louisville, Kentucky. Over1,200 students participated in ISEF, competing for $4 million dollars of funds and other donated awards.