Please join the Washington Space Business Roundtable on October 5, 2022 for a conversation on the future of space workforce. The program will feature remarks from Chirag Parikh, Deputy Assistant to the President and Executive Secretary of the National Space Council. Following remarks award-winning meteorologist, Meredith Garofalo, will lead a conversation with space workforce policy leaders from the National Space Council, Department of Labor, and Department of Education about priorities and actions being taken to strengthen the space workforce and discuss how government and industry can better partner on these efforts.

This conversation follows Vice President Kamala Harris’s announcement at the September 9, 2022 National Space Council Meeting of new commitments from the U.S. government, private sector companies, education and training providers, and philanthropic organizations to support space-related STEM initiatives to inspire, prepare, and employ the next generation of the space workforce.

This event will be held at the City Club in Washington, DC, located at 555 13th Street NW. Networking and registration will begin at 11:00 am, with lunch to be served at 11:20 am. The program will conclude at 1:10 pm. 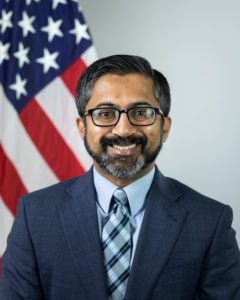 Mr. Chirag Parikh was appointed by the President as the Executive Secretary of the National Space Council on August 2, 2021. As Executive Secretary, he is responsible for advising the Vice President, in her role as Chair of the National Space Council, on developing national policies and strategies across the civil, commercial, and national security sectors. He is also responsible for overseeing the implementation of United States space policies and strategies and working across the United States Government as well as with industry, international, and academia partners to meet Administration objectives through the space sector. Mr. Parikh joined the Administration from Microsoft Azure, where he led the creation of a company-wide business unit, known as Azure Space, to bring together the power of global cloud capabilities with evolving space sector.

Prior to Microsoft, he had a U.S. government career that spanned more than two decades. He has served as a Senior Executive at the National Geospatial-Intelligence Agency (NGA) leading collection and tasking of geospatial intelligence (GEOINT) sensors and the analysis of GEOINT data. From 2010-2016, he served as the Director of Space Policy on the White House National Security Council overseeing U.S. national security space efforts. He has also served as the Deputy National Intelligence Officer for Science and Technology and as an aerospace engineer at the National Air and Space Intelligence Center. He holds a B.S. in Aerospace Engineering from the University of Cincinnati. 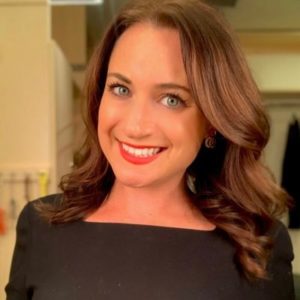 Meredith Garofalo is an Emmy-nominated award-winning Senior Meteorologist & Space/Science Correspondent for News 12 in the New York City area. She is a Certified Broadcast Meteorologist designated by the American Meteorological Society (AMS) and was the 2021 Chair for its Station Scientist Committee, which focuses on raising greater awareness & outreach when it comes to science/space education for viewers.

Meredith’s personal and professional work has been recognized numerous times over the last decade including being awarded “Favorite Weathercaster of the Year,” Make-A-Wish Tri-Counties’ Community Partner of the Year, and most notably the inaugural Valparaiso University Alumni Association First Decade Achievement Award recipient. In 2022, Meredith was named one of the Top 100 Women in Aviation & Aerospace to Follow on LinkedIn for her involvement in the space community and also was the recipient of several awards for her life-saving coverage during the Long Island Tornado Outbreak in November of 2021.

During her career, she has covered both on-air and in the field some of the most devastating natural disasters around the world including hurricanes, tornadoes, wildfires, winter storms, and flash flooding.  Meredith is also an accomplished reporter and storyteller covering rocket launches, producing in-depth special reports and features on NOAA’s GOES-R and JPSS satellite series, and coverage on some of NASA’s biggest accomplishments. She’s interviewed some of the top scientists and leaders of the space & science industry including astronauts live from the International Space Station, and her career highlight was being selected as the only meteorologist to travel with the GOES-West satellite from Colorado to Florida in 2017 on the C-5M Super Galaxy. 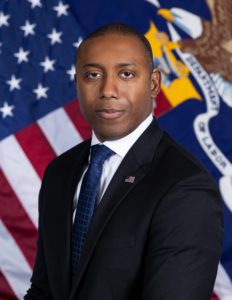 On January 20, 2021, Chike Aguh (Chee-kay Ah-Goo) was sworn in as Chief Innovation Officer (CInO) at the US Department of Labor, appointed by President Joe Biden. Reporting to the Deputy Secretary and also serving as Senior Advisor for Delivery, he leads efforts to use data, emerging technologies, and innovative practice to advance and protect American workers.

Additionally, Chike has worked as an education policy official and teacher in America’s largest school system; Fulbright Scholar in Asia; director of corporate strategy and performance technologies at Education Advisory Board (EAB); CEO of a national social enterprise which helped connect 500,000 Americans in 48 states to affordable internet and digital skills; and Senior Principal and Future of Work Lead at the McChrystal Group, a business advisory firm founded by Gen. (ret.) Stanley McChrystal. He has written for, spoken at, or been featured in Forbes, Fast Company, Wired Magazine, FORTUNE, Harvard, Wharton, and the White House. 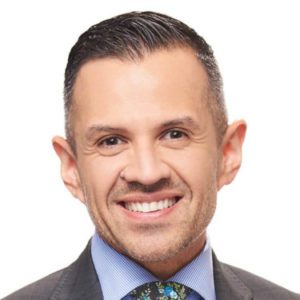 Joaquin Tamayo, a former high school teacher and principal, is Chief of Staff in the Office of the Deputy Secretary at the U.S. Department of Education (ED) and a proud LGBTQ+ member of the Biden-Harris Administration. In this capacity, Joaquin supports Deputy Secretary Cindy Marten’s leadership on national PreK-12 policy and departmental budget, operations, and management. Joaquin also leads ED’s STEM and innovation portfolios as well as the Administration’s National Partnership for Student Success.

Previously, Joaquin was a Senior Policy Advisor at EducationCounsel where he helped create and lead the Science of Learning and Development Alliance, and co-founded and was National Director of the Middle School Kindness Challenge (now Teach Kindness) at Stand for Children.

Between 2014 and 2017, Joaquin served in the Obama Administration, first as special assistant to the assistant secretary and then as Director of Strategic Initiatives for Elementary and Secondary Education at ED. Joaquin was also a member of President Obama’s My Brother’s Keeper Federal Taskforce.

Prior to his Obama Administration service, Joaquin was assistant director of the Aspen Institute Education & Society Program, where he managed the Aspen Congressional Education Staff Network.  And, in 2005, he led a team of educators to found the Urban Assembly Academy of Government and Law (AGL), a small, government and law-themed public high school in New York City’s Lower East Side. Joaquin began his career in education as a social studies teacher and student activities director in the Los Angeles Unified School District, where his mother has taught middle school children for 41 years.

Joaquin holds a B.A. in political science from Columbia University, a master in public affairs from the Princeton School of Public and International Affairs at Princeton University, and is a graduate of the New Leaders for New Schools urban principal residency program.

Thank You to Our Sponsors!