In light of the resurgence of the COVID-19 virus and its Delta variant, we regret to inform you that we must cancel the Washington Space Business Roundtable Annual Flagship Luncheon, scheduled for September 8, 2021 in conjunction with the SATELLITE Convention.

Our program with General James H. Dickinson will be held as a virtual meeting at a future date.  General Dickinson’s team is working on confirming a date for us at this time.

We will provide full refunds for those who purchased tables and tickets to attend this event.  If you paid by credit card, we will refund the card that was used for the transaction.  No further follow up will be needed.   Please note the refund will show up within the next 30 days.

On behalf of the Board of Directors for the Washington Space Business Roundtable, thank you for your continued support of our organization and our youth education mission.   We are working on a robust program calendar with a focus on continuing to bring informative and insightful speakers.

“US Space Command: Successes, Challenges and How the Commercial Space Industry Can Play Its Part in Advancing Its Critical Mission”

As part of its first change of command, U.S. Army Gen. James H. “Jim” Dickinson assumed command of USSPACECOM from U.S. Space Force Gen. John W. “Jay” Raymond, who was dual-hatted as the Space Force Chief of Space Operations and commander of USSPACECOM.

As his bio below shows, General Dickinson’s career has encompassed an extraordinary range of assignments.

WSBR is incredibly fortunate to have General Dickinson take time from his schedule to discuss his Command’s multi-dimensional mission and how industry can most effectively partner with his organization to advance our nation’s national security interests.

“United States Space Command faces a unique dilemma in that we can’t plan for future conflicts based on how we fought previous conflicts even if we were inclined to do so. Rather, we are preparing for the war not yet fought,” U.S. Army General James Dickinson writes. “Why do we need to prepare for such a conflict when space has traditionally been a peaceful domain? The answer is because highly capable competitors realize the extraordinary military and economic advantages that space-based capabilities give to the United States and our allies.” 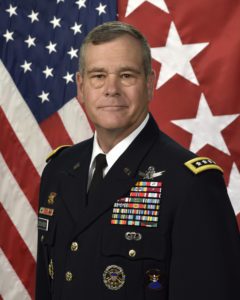 He is a native of Estes Park, Colorado, and a graduate of Colorado State University. He holds a Bachelor of Science in Mechanical Engineering and a Master of Science in Operations Research and Systems Analysis from the Colorado School of Mines. He later earned a master’s degree in Strategic Studies from the United States Army War College.