Please join us Wednesday, July 20, 2022, at 12Noon ET, to hear from our distinguished speakers:  Astronaut Audrey Powers, who joined William Shatner (aka Captain Kirk) and two other crew members on Blue Origin’s New Shepard on October 13, 2021; and Michael López-Alegría (aka Mike L-A) – a decorated astronaut who recently returned to low-Earth orbit for the fifth time in 2022 as Commander of Axiom Mission 1, history’s first all-private crew to the International Space Station.

Since our annual auction is dedicated to raising funds for STEM, WSBR thought it appropriate to have two speakers who are outstanding role models for next generation of space explorers.

Engineer and attorney Audrey Powers who has devoted much of her career to advancing the commercial space domain and pioneering astronaut Mike L-A who has devoted his post distinguished NASA astronaut career to advocating with the U.S. Congress and pertinent Executive Agencies for favorable public policy on behalf of the commercial spaceflight industry.

Check back here for the link to the auction site!

“I’m so proud and humbled to fly on behalf of Team Blue, and I’m excited to continue writing Blue’s human spaceflight history.” 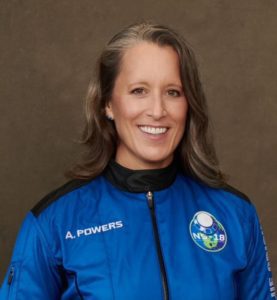 Audrey Powers is the Vice President of Mission & Flight Operations for Blue Origin where she is responsible for New Shepard flight operations and training, vehicle maintenance, and launch complex infrastructure at Launch Site One. Audrey is also an astronaut, having flown on the second human flight of Blue Origin’s New Shepard program, NS-18.

Audrey received a Bachelor’s degree in Aeronautical and Astronautical Engineering from Purdue University in 1999 and worked as an engineer for almost 10 years prior to becoming a lawyer. As a guidance and controls engineer, she was a flight controller for NASA with 2,000 hours of console time in Mission Control for the International Space Station Program. After leaving NASA she supported government satellite programs for Lockheed Martin and received a Juris Doctor in 2008 from Santa Clara University School of Law.

Audrey previously served as the Chair of the Board of Directors of the Commercial Spaceflight Federation and is the Executive Sponsor of Blue Origin’s New Mercury Business Resource Group, which promotes gender diversity in the workforce at Blue Origin.

“Part of it felt extraordinarily familiar. I’ve told people that it’s not like going back to your home, but it’s like maybe going to your parents’ home, where you grew up, and it’s been slightly remodeled since you were there.”

– Michael López-Alegría, a former NASA astronaut and commander of the Ax-1 private astronaut mission, on what it was like to return to the International Space Station last month for the first time since a long-duration spaceflight there 15 years ago, when the station had not yet been fully assembled. 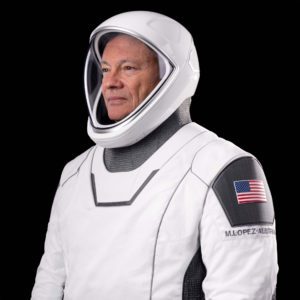 Michael López-Alegría is a decorated astronaut who returned to low-Earth orbit for the fifth time in 2022 as Commander of Axiom Mission 1, history’s first all-private crew to the International Space Station. “Mike L-A” (as he’s known to the space community) is involved in both operational and business development efforts within Axiom Space.

He has more than 40 years of aviation and space experience with the U.S. Navy and NASA in a variety of roles including Naval Aviator, engineering test pilot and program manager, NASA astronaut, and International Space Station commander. He also holds NASA records for most extravehicular activities (EVAs) or ”spacewalks” (10) and cumulative EVA time (67 hours, 40 minutes). He was inducted into the U.S. Astronaut Hall of Fame in 2021.

Mike L-A is the former president of the Commercial Spaceflight Federation, where he was a spokesman, thought leader, and advocate with the U.S. Congress and pertinent Executive Agencies for favorable public policy on behalf of the commercial spaceflight industry. He has served on several advisory boards and committees of public and private organizations, including the Human Exploration and Operations Committee of the NASA Advisory Council and the Commercial Space Transportation Advisory Committee (COMSTAC) to the FAA, and is the current chairman of ASTM International’s Committee on Commercial Spaceflight as well as past President of the Association of Space Explorers. He earned a B.S. in systems engineering at the United States Naval Academy and an M.S. in aeronautical engineering from the Naval Postgraduate School.