Paul is known to many of us in the space industry as a true pathfinder.  He brings three decades of technical and executive leadership to the software simulation (who does not know of the legendary STK Kit – used for analyzing and visualizing complex systems in the context of space missions) and literally built AGI from scratch to a well-known brand in our community-at-large. Among other topics, Paul will discuss lessons learned in building a successful company, describing the future of AGI as part of Ansys and his perspectives on how industry can best advance the Federal Government role Digital Engineering. Paul will make the case for how this engineering strategy, which is relatively new to our industry, is a force multiplier for technological innovation and maintaining a strategic advantage in both the marketplace and over our adversaries. 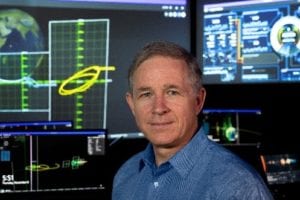 For more than 30 years, Paul has championed the use of commercial software in the national security and space industries. Today, AGI’s flagship product, STK, is used in more than 50,000 installations around the world, spanning the aerospace, defense, and intelligence industries.

Paul is chairman of the boards of Cesium, OneSky and ComSpOC. He sits on the board of directors of Passur Aerospace and serves as vice chairperson of the Federation of Galaxy Explorers (FOGE). He is a director emeritus of the United States Geospatial Intelligence Foundation (USGIF), a member of the board of governors of the Aerospace Industries Association (AIA), and an associate fellow of the American Institute of Aeronautics and Astronautics (AIAA). Paul is also a former member of the board of governors for the Civil Air Patrol (CAP), and today he serves as chairman of the Civil Air Patrol Foundation. In addition, he previously served on the Advisory Board for Penn State Great Valley. And, after fulfilling his board tenure, Paul was elected to the honorary position of life director of The Space Foundation.

Paul earned a Bachelor of Science degree in biology from LaSalle College, but quickly pivoted his career by virtue of his software development skills, launching into satellite command and control systems with General Electric’s Space Division in 1980. Paul is a serial early adopter of all technology, an avid woodworker, and a sports car enthusiast.

AGI is an Ansys Company