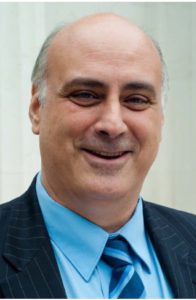 Nicholas Eftimiades, prominent expert/author will discuss the profound strategic impact of China’s space activities on U.S interests, including stunning insights into China’s efforts to undermine America’s leadership. He will also discuss his newly released book, China’s Espionage Operations and Tactics, regarded as the most detailed work ever published in the unclassified world on China’s intelligence tradecraft. Mr. Eftimiades has a long history of success as an innovator in the U.S. Intelligence Community.  He is widely regarded for his expertise on China and national security space issues.

He has authored books, reports, and a number of articles on China’s intelligence methodology, national security, technology, and space issues. Mr. Eftimiades is a frequent lecturer and public speaker on future technology, space, and national security issues. He has appeared as an expert on CBS Evening News, Dateline NBC, ABC’s Day One, BBC, BBC America, National Public Radio, and dozens of other television and radio broadcasts. He has been quoted in hundreds of newspapers and magazines across the world.

For over two decades, senior government officials and Members of Congress relied on Mr. Eftimiades to provide in depth expertise and cogent analysis on China and space issues. As a senior intelligence officer, he led efforts in the National Security Space Office.  He was also Chief of DIA’s futures division and Space Division.

Mr. Eftimiades retired from a 34-year government career including employment in the CIA, the US Department of State, and Defense Intelligence Agency.

Nicholas Eftimiades is now a professor at Penn State University, Homeland Security Program. He is a member of the graduate faculty teaching homeland security, intelligence, and national security policy.

The Intelligence Community recognized Mr. Eftimiades with numerous awards to include the National Intelligence Council Achievement Award and DIA Director’s Intelligence Award – that agency’s highest recognition of achievement. As a subject matter expert, he provided congressional testimony and briefings to the Cox Commission, the Joint Economic Committee, President’s Commission on the Moon, Mars, and Beyond, and numerous individual meetings with Members of Congress and staff.

Mr. Eftimiades currently holds an appointment as an Intelligence Community Associate on the National Intelligence Council. He also holds appointments on the Defense Science Board, and on the Department of Homeland Security Advisory Council, Subcommittee on Economic Security.