As the National Reconnaissance Office (NRO) turns 60 this year, Dr. Scolese will discuss how the NRO has evolved, as well as share his vision for the future of the organization.  He will also discuss how the NRO collaborates with the commercial space sector and provide insight into new potential opportunities for commercial partnerships.

WSBR is most fortunate to host Dr. Scolese, whose distinguished career has spanned across the Department of Defense, Intelligence Community, and NASA, has positively impacted the NRO as well as paved the way for its future success. We hope you’ll join us for this truly special event. 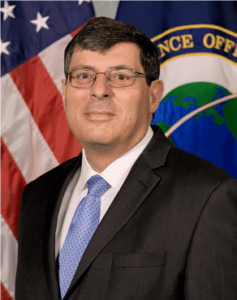 The Honorable Christopher J. Scolese was appointed the 19th Director of the National Reconnaissance Office (DNRO) on 1 August 2019.  The DNRO provides direction, guidance, and supervision over all matters pertaining to the NRO and executes other authorities specifically delegated by the Secretary of Defense and the Director of National Intelligence.

Dr. Scolese began his government career as a United States Naval Officer in 1978, supporting a variety of Naval Nuclear Propulsion Programs for the U.S. Navy and the Department of Energy.

In 1987, following a brief period of service working in government and industry, Dr. Scolese joined the National Aeronautics and Space Administration (NASA) where he was assigned to the Goddard Space Flight Center, located in Greenbelt, Maryland.  During this period, he served in a variety of senior management positions including: Earth Observing System (EOS) Systems Manager, EOS Terra Project Manager, EOS Program Manager, and Deputy Director of Flight Programs and Projects for Earth Science.

In 2001, Dr. Scolese was assigned to NASA Headquarters in Washington, D.C. where he served as the Deputy Associate Administrator in the Office of Space Science.  In this position, he was responsible for the management, direction and oversight of NASA’s Space Science Flight Program, mission studies, technology development, and overall contract management of the Jet Propulsion Laboratory.

In 2004, Dr. Scolese went on to become the Deputy Director, Goddard Space Flight Center, where he assisted the Director in overseeing all activities, before returning to Washington, D.C. to become NASA’s Chief Engineer in 2005.  As Chief Engineer, he was responsible for ensuring all development and mission operations were planned and conducted on a sound engineering basis.  In 2007, he was appointed the Associate Administrator, responsible for the oversight and integration of NASA’s programmatic and technical efforts.  From January – July 2009, Dr. Scolese served as NASA’s Acting Administrator, responsible for leading the development, design and implementation of the nation’s civil space program.

In 2012, Dr. Scolese went on to serve as the Director, Goddard Space Flight Center, where he led the nation’s largest organization of scientists, engineers, and technologists responsible for building spacecraft, instruments, and new technology to study Earth, the sun, our solar system, and the universe.  On 31 July 2019, he retired from NASA to become the DNRO.