The Launch Enterprise is committed to investing in technology, commercial innovation, and industry partnerships to retain U.S. dominance in space launch. The Phase 2 contract award looks to begin the dawn of a new era in U.S. launch innovation. It promotes competition, maintains a robust launch industrial base and reinforces global competitive advantages for the U.S. and her allies.

Col Bongiovi has stated that “We’re really interested in where innovative industries are seeing launch going in the future and what they’re doing to get to that future … It’s not just how do we get from Earth to orbit? What are the different on-orbit concepts of operations that might drive different launch needs, what do we need to be doing to get these future constellations up there?” To that end, the Space Force is interested in space access, mobility, logistics, and innovation to meet existing NSSL requirements and future capabilities to provide increased resiliency and support multi-modal operations in diverse orbital regimes (e.g., beyond GEO, Cis-lunar, Trans-lunar, and Lagrange Points).

WSBR is most fortunate to have Col Bongiovi whose broad range of senior military leadership assignments have led to a portfolio that is shaping and driving the U.S. Space Force acquisition of the NSSL program (formerly EELV) and the Rocket System Launch Programs (RSLP). 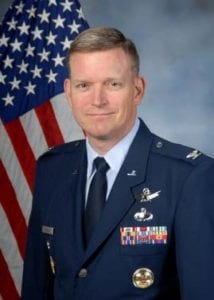 Col Bongiovi was commissioned through the ROTC program in 1992 after graduating from the University of Dayton. He has served in multiple roles within the Office of the Undersecretary of Defense for Acquisition, Technology, and Logistics (OSD/AT&L), as the Executive Officer to the Space and Missile Systems Center Commander, as a Materiel Leader in the Space Based Infrared Systems Directorate, as the Chief of Staff for the National Reconnaissance Office’s Office of Space Launch, and as the Air Staff Program Element Monitor for the Evolved Expendable Launch Vehicle program. He has had multiple Space and Missile Systems Center program manager assignments and has served at the National Reconnaissance Office, both as a program manager and in mission operations.

Prior to his current assignment, Col Bongiovi was Senior Materiel Leader, Acquisition Division, Launch Systems Enterprise Directorate, Space and Missile Systems Center, Los Angeles Air Force Base, California. In this position, he was responsible for the acquisition of the Air Force’s future launch systems to meet the Air Force, National Reconnaissance Office and other National Security Space systems’ launch requirements.